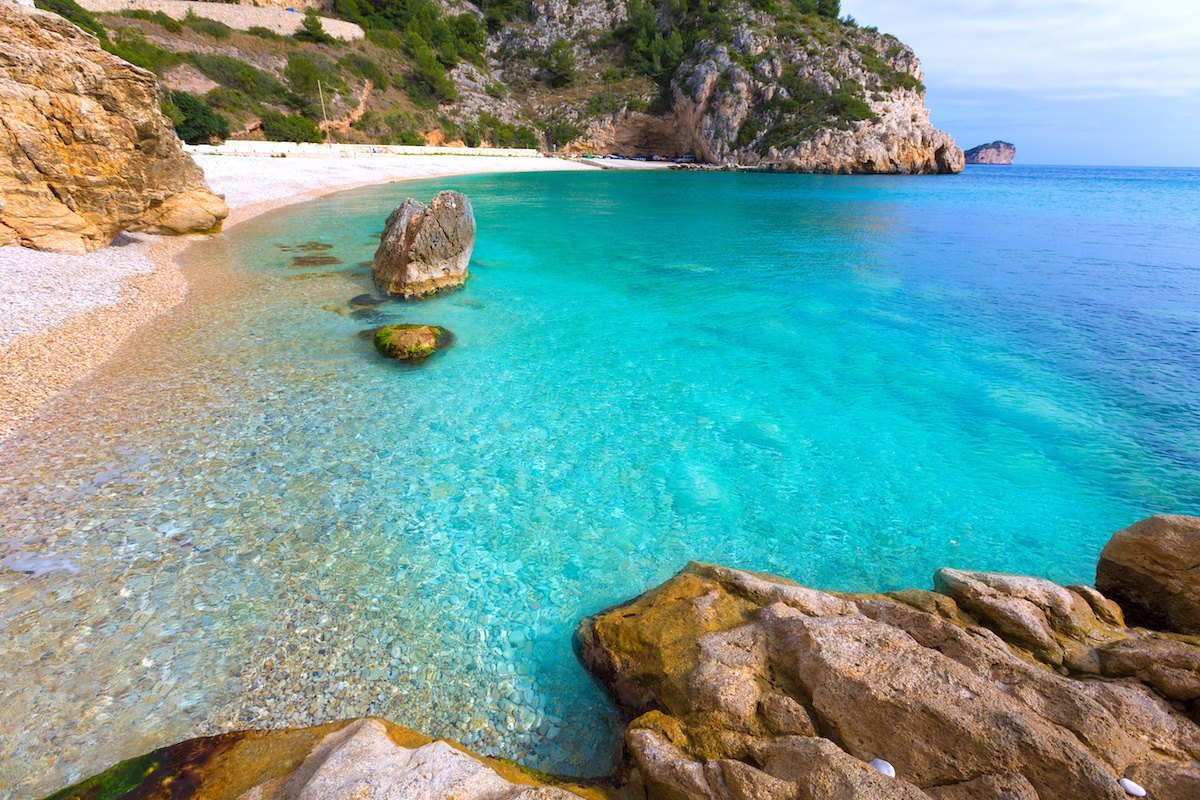 Gravel beach is in the urban area of Aduanas del Mar. Its occupation level is medium and its length is 290 m. This beach is annually awarded with the blue flag. Semi-urban and open beach of gravel and rock that extends from the mouth of the Gorgos River to the Arenal beach. The size and extraction of the rough, exploited as construction material, is very well appreciated on this beach. The name "Benissero" that has adopted part of this beach is due to the house owned by a citizen of Benissa, a town near Jávea. In its southernmost slope we will find a large excavated raft, known as the Baños de la Reina. This area was a commercial settlement in the second half of the s. I a.C., where they elaborated salted fish sauce and sauce. This section is popularly known as the "Cala del Ministro". Its occupation level is medium and it has a length of approximately 2km (1600m of rough and 400m of gravel).

Urban beach of coarse sand and shallow waters located in the center of the Bay of Xàbia, in the urban nucleus to which it gives its name. It is the best known and frequented for being the only sandy beach in the municipality. Next to it, there is a canal, which gives access to the sea to small boats. In its northern end is the Punta de Arenal, where the Parador de Turismo is located and at its southern end is the Mirador Punta del Castell. Degree of high occupancy. Length: 480 m (approx.) This beach is annually awarded with the blue flag.

Semi-urban and open rock beach south of the Arenal beach, composed of a rocky coarse coastline (stone formed by fossilized sand). It is also appreciated, as in the First Muntanyar, the rough size and extraction. In it is the Mirador de la Séquia de la Nòria.

Composed of two contiguous coves, connected by stone littoral. Its name derives from the whitish color of the rocks of its cliffs. Average occupation. CALETA I
Rustic cove of gravel and rock located at the end of Avenida Ultramar. It has access by car and the last section is made by a small promenade of about 100 m. From there you can access the viewpoint of Cala Blanca. Its length is 80 m. approximately.

CALETA II
Rustic cove of gravel, bowling and rock. It is characterized by its rough stone arm that goes out to the sea as a barrier, so its waters are usually calm and crystal clear. Its access is done on foot from the I Caleta. You can also access it from the Mirador de les Caletes, by stairs. It has a length of about 40 m. approximately.

Small virgin cove of gravel and bowling located on the northern slope of Cap Prim or Sant Martí. Access to this cove is made on foot from the Mirador de la Cruz del Portitxol, through a path that runs alongside an original and intact nature. Formerly it was the best place for sardinals, fine nets that were caulked twice a day, at sunrise and sunset, hence the origin of their name. Its length is 200 m. approximately and their occupation level is low.

Rustic cove of gravel, bowling and rock located between Cap Prim and Cap Negre. It can be accessed, both by car from the road. from Cabo de la Nao, as on foot from the Mirador de la Cruz del Portitxol. In front of the cove, we find the Island of Portitxol (300 meters) of great botanical and archaeological interest. Highly recommended for scuba diving.

Nudist and virgin cove, with crystal clear waters near Cabo de la Nao. It owes its name to the watchtower built in the sixteenth century, whose function was the surveillance and maritime defense of pirate attacks, as well as the other lookout tower of Jávea located in the area of ​​Portitxol, both located on private land. In its southernmost slope we find the island of the Discoverer. Near the cove we have the Ambolo viewpoint. Rustic cove with crystal clear waters, ideal for scuba diving, is located in the southernmost area of ​​Xàbia. It is accessed through a road of the same name, which is taken from the Ctra. Cabo de la Nao, approximately 2 km before reaching it. From the same Granadella road you can access the Mirador, and from the parking of the cove begins the hiking route of the Castell de la Granadella.